Why do we do the things we do?: Verbal Operants – Functions of Language

B. F. Skinner devised the approach to language through breaking down language into functions, which he discussed in his book published in 1957. He described that language fell into different ‘Verbal Operants’ depending on the function (purpose) of the language. He suggested that words can have different meanings depending on the circumstances, for instance the word “dog”, can be different when it is a request (calling a dog over for an interaction), vs labelling dog (when seeing one and trying to get another person to attend to the dog) vs answering the question, “what pet does Nanny have?” – Dog. B. F. Skinner stated in his book, “Any operant, verbal or otherwise, acquires strength and continues to be maintained in strength when responses are frequently followed by the event called ‘reinforcement‘” (page 29). There are six main types of Verbal Operants which will be discussed here; mand, echoic, receptive, tact, intraverbal, and textual.

Reinforcement can be better understood by consider the three term contingency, which is broken down into the Antecedent (an event in the environment that occurs directly before the behaviour) which involves a verbal or non-verbal stimulus, the Behaviour (specifically the target behaviour, what the speaker says or does) and the Consequence (what happens directly after the behaviour). Learn more about the three term contingency in Intro Series: Part 1). Considering the three term contingency can help us distinguish whether a language unit is different types of Verbal Operants. Cooper, heron & Heward (2007) stated that “Controlling variables define verbal operants, not the form of the verbal stimuli” (page 533). There are six main types of Verbal Operants which will be discussed here; mand, echoic, receptive, tact, intraverbal, and textual. These are not limited to vocalisations and sounds; mands, tacts, echoics and intraverbals can all occur through other forms of communication (e.g. Makaton sign language, Picture Exchange Communication System (PECS), etc.).

The mand is distinguished by the motivating operations occurring before the request (antecedent), and that the consequence is the specific item, action, information delivered which matches the request. For instance, a child asks for “cookie” because there is motivating operations of hunger or a craving for something sweet, they request cookie and they  (often) receive the cookie from their caregiver. Teaching mands (requests) is an important aspect for children whose language development is impacted. This is initially how language develops in young babies and children; babies begin to change their cries and mothers can identify the needs by the differing baby cries, then as they begin to produce sounds most of the initial words will include requests. Sigafoos et al (2004) state that due to this “this provides a developmental logic for emphasising requesting and rejecting when beginning communication intervention programs for children with severe disabilities”.

The characteristics of the Echoic are no motivating operations to get a specific need met; the antecedent is hearing a vocalisation (or seeing an action). This is then copied and the consequence will be social. The echoic develops in the first stages in a child’s language development. Children begin to babble and then sounds are shaped towards the words they hear in the environment. Parents will often repeat “Muma” and “Dada” to young children to help the child develop an echoic repertoire and repeat the sounds. As language develops in an alarming rate in typical development and considering language is very complex, Behaviourist believe there is many factors supporting this. These include reinforcement from parents (Social praise, attention, etc.) and automatic reinforcement (an innate desire to speak  and sound more like those around us). Singing along with your favourite song would be considered another type of echoic behaviour that is reinforced by automatic reinforcement (feels good, enjoyable and not mediated by another person).

This also includes Motor Imitation, where actions are copied. This can also include persons who use sign language to communicate. The may copy actions in a similar way that are units of language, under the same function (purpose).

This verbal operant involves the person being given a verbal instruction (antecedent) and then they complete an action, identify a item or object (not making a verbal response).  For instance, this could be instructions like “can you stand over there?”, or “can you pass me a spoon, please?”. These responses identify someone’s understanding of language and expects them to perform a task. The consequence may be positive reinforcement through social-mediated interactions (being thanked), or following the instruction may help you access something (for instance if you could not open something and then you are told, you need to turn the key twice, you complete the action and then the door or box is opened. Also there could be some element of automatic reinforcement if you have intrinsic reward for following the instruction (feeling positive for being helpful).

This unit of verbal behaviour involves the speaker labelling an item or object, part of an item or an event. The distinction is that the tact is reinforced (the consequence that follows maintains or increases the future probability of the tact being used) does not match the tact itself, and it is also prompted by a non-verbal stimulus (the item, object or event). An example of the tact could be a child pointing up to an aeroplane and labelling ‘aeroplane’, and a mother smiling and saying “Yes you’re right!”. Alternatively, when someone asks you “What is this?” or “What’s the name of this?” and then the speaker labels that item, they are then thanked or praised, depending on the scenario.

Children (and adults) usually learn tacts through their interaction with the environment and other speakers. For instance a young child may point at different animals at a zoo and their parent or carer may say the name of each. This experience of seeing a stimulus and hearing the tact, may begin to evoke a response in the child and they begin to tact each animal and then they receive socially mediated reinforcement.

The Intraverbal is prompted by an antecedent stimulus that is verbal (spoken word, sign, etc.) by another person, and it evokes a verbal response. The consequence is usually socially mediated and non-specific (different to mands which require specific consequences; a cookie if a cookie is requested). This can be examples like when someone asks for the time, the person answering and saying “3 o clock” is engaging in an intraverbal response (the request for the time was a mand though). Another example could be “What flies in the sky and takes you on holiday?” and the persons answer of “aeroplane” is an intraverbal response. Alternatively if someone makes a comment and you respond verbally this is an intraverbal, for example “There is a new movie out with Brad Pitt” and you respond “I haven’t seen the advert for that”, this response is an intraverbal, as your comment is evoked by another persons verbal behaviour.

This relates to reading, seeing a word and reading that word. The verbal behaviour is evoked by written words (antecedent) and the response is spoken word or sign language. This could also relate to reading braille as these symbols can carry meaning for language. An example could be reading a word “cat” in a book with a child and the child reads it aloud. Alternative, seeing a sign in the road “No entry” and reading it out loud for the driver to know not to drive that way. 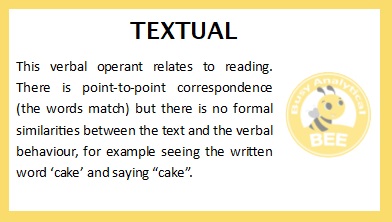 <— Back to the Intro Series Homepage

Why not check out this great video from Autism Live that explains Verbal Operants.

Sundberg, M. L. (1990). The Acquisition of Tacts, Mands, and Intraverbals by Individuals with Traumatic Brain Injury. The Analysis of Verbal Behavior, 8, 83-99.

Petursdottir, A. I., ÓLafsdóttir, A. R. & Aradóttir, B. (2008). The effects of tact and listener training on the emergency of intraverbal relations, Journal of Applied Behavior Analysis, 41, 411-415.

Esch B. E., Carr, J. E., & Michael, J. (2005). Evaluating stimulus-stimulus pairing and direct reinforcement in the establishment of an echoic repertoire of children diagnosed with Autism, The Analysis of Verbal Behavior, 21, 43-58

Stock, R. A., Schulze, K. A., & Mirenda, P. (2008). A comparision of stimulus-stimulus pairing, standard echoic training, and control procedures on the vocal behavior of children with Autism, The Analysis of Verbal Behavior. 24, 123-133.